That’s the important progression Trinity Elementary School fifth-graders experienced recently when they were celebrated during a Moving-Up Ceremony. Parents, families, teachers, and staff honored the 128 hard-working students with speeches, and the festivities included graduates performing and signing singer Natasha Bedingfield’s “Unwritten.” Principal Michael Hilderbrand was joined by former Trinity principal and current Mahopac Schools Superintendent Anthony DiCarlo, as well as former physical education teacher and current entrepreneur Troy Millings. Each encouraged students to forge their unique paths and to be lifelong learners. Students were presented with awards for citizenship, effort, academic growth, and academic excellence. Nurse Nora Wolloch and Suellen O’Malley were honored for their retirements with awards in their names.

Recently, 143 kindergarten students were in the spotlight during their Moving-Up Ceremony, which included a processional to “Pomp and Circumstance,” singing, photographs, and a speech from Hilderbrand. He reminded students and families that lessons learned in kindergarten are applicable during all stages of life. A special moment took place when flowers were presented to Carol Mazzella for her retirement. One kindergartener summed up the entire ceremony’s special vibe by saying, “I’m so excited! We are graduating and starting first grade!” 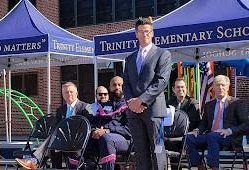